Last weekend people had started putting out stuff ready for the council’s waste collection during the week. And I found some treasures! I had been hoping for some sort of chandelier, and finally I found one! You just have to keep your eyes open, and wait, and wait some more. And at some stage something suitable will turn up 🙂

So this is what I found:

Both pretty dirty and rusty, but beautiful shapes.

I picked up a couple of bottles of spray paint on Monday, however I had to wait to start the beautification process. Because it’s been blowing dogs off chains this past week! (For those that don’t speak Aussie slang, that means it’s been very, very windy.) There have been severe weather warnings on several days, and although it’s been worse in other parts of the city, it wasn’t the best weather for spray painting.

However, I set myself up in the carport on Thursday, and started. I used a wire brush to get a lot of the rust and dirt off the chandelier. I didn’t bother sanding it down further, although that would have made for a much smoother finish. But it’s pre-loved – it doesn’t need to be perfect! I realised that the lantern was only being held together by rust, so I was very, very gentle with it. A few coats of paint can only help that, can’t they?!!?

The man in the hardware shop recommended I use White Knight Rust Guard, and if that had come in a colour I wanted that would have been enough. But it didn’t, so I had to find another brand for that. I chose British Paints Bright Pink. I wanted these items to be features in the garden, which is why I decided to go the bright pink.

Here they are after they’ve had a bit of the rust guard: 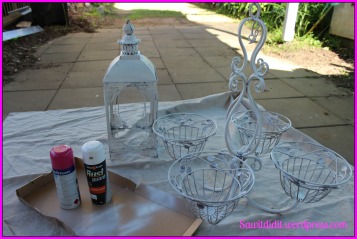 Looking better all ready! The wind was gusting all around so I couldn’t complete the job that day.

Since the lantern really is on it’s last legs, I knew it was definitely going to end up pink. If it’s not going to be here for a long time, it’s going to make a big impact while it is! As for the chandelier, I wasn’t sure where it was going to go, so I decided to leave it white until it had a spot. Then I would decide if it would end up pink as well.

So this morning I walked around the garden – front and back – looking for spots to feature these treasures. I had to walk around more than once 😉

I am happy with the spot I found for the little pink lantern, although it does clash with the colour of the house next door 😉 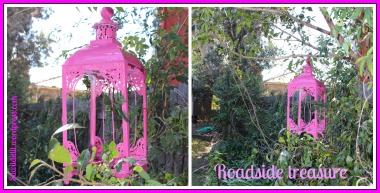 The gale force winds are still around today, so I’ll be keeping an eye on it to make sure it stays put. It’s a very green part of the garden at the moment, so it’s nice having the pop of pink. And, assuming it doesn’t disintegrate before then, it will look lovely with the purple Wisteria and Agapanthus when they flower.

I couldn’t find a tree from which to hang the chandelier, so I decided to add it to the deck. One of the very first Pinterest-inspired projects I did was the chandelier made from icicle lights hanging from a hula hoop. But it had been there for a couple of years and some of the lights weren’t working, and it was looking a little shabby. So I took that down and it will go out in the next Council Clean-up. I’m very pleased I decided to keep the chandelier white 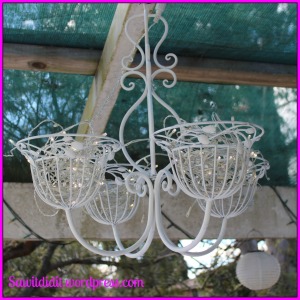 I hunted around for some lights to use. I tried out some solar lights, but once I knew it was going on the deck they weren’t going to work so well. I did some juggling of lights that we already had out in the garden, and found some clear icicle lights to use. I divided the icicles equally between the bowls, and hung it up. I may hang some crystals from it at a later stage, but for now I like it. I may have to paint the birdcages hanging down the end white as well. They are also filled with fairy lights. 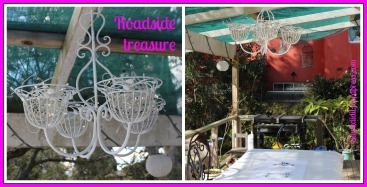 And I still have another roadside treasure from this week to do up and share with you soon!

What’s the best thing you’ve collected from the side of the road (checking that it is ok to do so with the local council of course!)?

Natasha In Oz Sundays Down Under

Chic on a Shoestring Flaunt it Fridays

Thoughts From Alice – Sundays at Home

Making it in The Mountains