Last weekend my friend celebrated her 40th birthday with a ‘come as someone famous’ party. As you can imagine there was much discussion on which character to go as and what to wear!

I was completely blank on who to go as, but I started thinking about dark haired ladies (since I am one!) and Audrey Hepburn came to mind. And once Audrey is in your mind, she won’t leave!

So I started a Pinterest board – Audrey Hepburn costume – to collate the ideas I found. Firstly, this was a fun, dress-up party, not a look-a-like competition so I was just going for the ‘essence’ of Audrey. Audrey was 32 when she filmed the movie Breakfast at Tiffany’s and she played the role of Holly Golightly, a girl in her late teens. Now, it has been quite a while since I was 32 (and even longer since I was 19!) so I was a little unsure if I could carry the look off, but I went with it anyway 😉

A visit to the Op Shop found a black top and skirt for $5 each. Gloves came from a discount store. They aren’t gorgeous long gloves that Audrey would have worn, but they did the job. I added a blingy ring for some extra sparkle. A small tiara also came from a discount store. I love it, and might have to find somewhere else I can wear it…perhaps just around the house will do….!!

I had 2 strands of glass pearls which I easily made up into a double strand necklace. They weren’t long enough to go all the way around my neck, so I attached some black ribbon and tied it in bow at the back. Audrey wore a 3 strand pearl and diamente necklace with a diamente feature in the movie, but as I said, I’m going for the essence of her character. I borrowed some blingy clip-on earrings from my mum to complete the jewellery look. 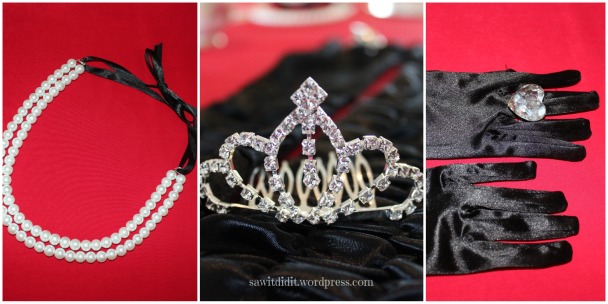 As for the gorgeous high bun she wore, well, at the moment my hair is only just shoulder length so there was no way I could do that myself. I could have gone with the big hat and sunglasses look, but the party was at night and I didn’t think that would work. So I did some Googling and discovered that you can get clip-on buns. So I ordered one from eBay and hoped it would arrive in time, would be a good colour, and would work. I got two out of three. The colour didn’t match my hair very well, but I could live with that. A thousand bobby pins later, lots of hairspray, and I was good to go!

These terrible photos were taken just before we left for the party on my phone with little lighting, so apologies for the graininess. But you get the idea…

We had spent the earlier part of the day helping to set up the party, and it was absolutely gorgeous! The decorations were all in silver and black, with lots of twinkly lights. There were some blue lights included, and they looked beautiful too. Here is a small glimpse – the first two I took as we were setting up, the second two were taken by someone else at the party. It looked magical:

You may have heard about the terrible weather we have experienced lately in Sydney, and up the east coast of New South Wales. On party night we had everything – lightning, thunder, rain and hail. But no-one cared!

I should add that there were 2 other Audreys at the party, we all looked different, but all looked good. In fact, everyone went to great lengths to dress up and there were some very interesting characters!

What’s the best dress-up party you’ve been to?

A Handful of Everything

2 thoughts on “Dress-up party, and my take on Audrey Hepburn”