My previous posts have all been about how we prepared for the party. Today the party is on!

We arrived at the park with plenty of time to set up. Make sure you give yourself lots of time for this – it always takes longer than you think! This year we were ready when the first guests arrived, so I was happy 🙂

We set up our gazebo to make it easy for our guests to see where we were. The gazebo was decorated in our theme colours of black, white/silver, and a splash of red. We had balloons (not enough – you can never have enough balloons at a party! – but the balloon blower-uppers had no breath left!) as well as bunting. A red tablecloth completed the simple look. 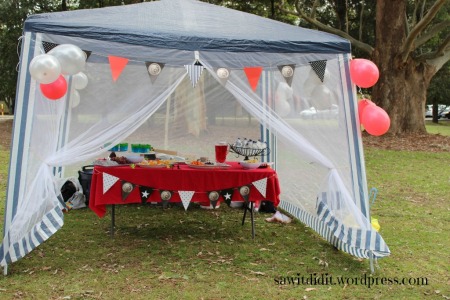 The bunting was a combination of flags. I bought a pack of black and white bunting of various design from the discount shop. I picked out the simplest designs to use along with some very cool Viking flags which I downloaded and printed from the How to Train Your Dragon site (it’s in the party kit). I also cut a few plain red flags from cardboard. I think the combination of colours and designs looked very effective!

I set out the food ready for the boys to help themselves whenever they needed to. There was a variety of party foods (chips, biscuits, jelly) and some healthy options (carrot sticks, fruit). The boys all got a personalised water bottle. I made the bottle label by downloading a cute picture of Toothless, then adding the text. I called the water ‘Dragon Drool’. This is a very simple thing to do, but the boys love it. They can take their water bottle home, and I know some continue to use it 🙂

I didn’t take any specific photos of the food table, but two-toned jelly is a must at parties and it looks good, so that did get a photo!

I had made each of the boys a Viking helmet, which they got as they arrived at the party. They were all happy to kick a ball around until everyone arrived.

The first game was Dragon Flying Training. This required the boys to each make some paper airplanes to use as dragons. I found a page of dragon drawings which I downloaded and printed. I cut the dragons out and made up a set for each boy. They glued a different dragon picture to each plane that they had made, and wrote their name on it.

Then it was time to fly their dragons. They took turns aiming to fly their creations through a hoop. Some dragons were good flyers, others not so much 😉

Next up was Pin the… In this case it was Pin the Eyes on Toothless, and Pin the Nose on Stoick. I do 2 separate but simultaneous games of this as it stops the boys who are waiting getting bored and annoying those that are blindfolded (as happened a few years ago!). I searched for 2 reasonably simple images I could copy and drew them freehand on some cardboard. The images I copied are on my Pinterest board

The cardboard pictures were attached to a nearby tree, and the boys’ eyes were covered with a makeshift blindfold. Yes, even though I wrote copious lists, I forgot just one thing – blindfolds!

The next game was Dodge the Dragon Fire. This game was very popular last year at our Adventure Time party, so I just renamed it for this party 🙂 The boys stood in the middle, surrounded by all the adults who had stayed to help. Let me tell you, if you have friends who are available and prepared to stay and help with your party, you are very lucky! We then rolled balls (aka dragon fire) through the crowd of boys, aiming for their legs. When they got hit they joined the outer ring and helped throwing the balls. 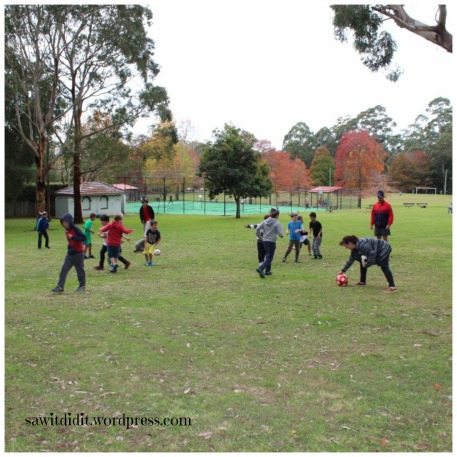 The boys thought it was pretty funny when the adults had a turn in the centre and had to jump over the dragon fire!

Everyone was hot and tired after this game, so we stopped for a drink and some snacks.

The last game we played was Frozen Dragons. All the boys except for 2 froze in a dragon pose, and those 2 had to try and make the frozen dragons move. They weren’t allowed to touch them. They could tell jokes, act silly, whatever it would take as long as there was no touching. Once they moved, they helped ‘unfreezing’ the other dragons. The posing boys worked out very quickly if you lie face down on the ground, or shut your eyes and cover your ears with your hands, it is very difficult to make them move. If you play this game, include in the rules not to do this! I stopped the second round and made them do it properly lol.

I find four organised games are enough for a 2 hour party. After we had birthday cake, the boys were happy to play Dodge the Dragon Fire again and again. Then they switched over to playing soccer. Give a group of boys a ball and they will happily amuse themselves!

As the boys went home, they were given a lolly bag containing a small selection of sweets along with a small plastic dragon which I found on eBay. The bags were very simple to make. I stuck Toothless eyes to a black bag (you can find a couple of examples of eyes on my Pinterest board). That’s it!

We are very lucky to have great facilities nearby where we can hold parties, and we were also very lucky that the weather worked in our favour on the day.

So that’s it! All about our How to Train Your Dragon party. If there is anything I have left out or not mentioned, please ask.

I wonder what will be the theme of next year’s party….