I am very excited to see all the blossoms on my peach tree! But I know from previous experience that unless I do something, we will not be eating any peaches from this tree. You see, we have a lot of native wildlife around here, and they like to eat your plants 😦

Last year I covered this tree with bird netting. I carefully watched the little peaches forming. But overnight they were gone.

So this year I have hung CDs on and around this and other plants. Mum tells me it has worked in her garden, so I’m hoping it will work here too!

At least the CDs haven’t deterred the bees

Let’s hope they do the trick and this year we will have more than enough peaches to feed us over summer!

What works to keep wildlife from eating your plants?

Yes, it won’t be long now until Spring arrives, although we have been very lucky and had a reasonably mild winter here in Sydney. Granted, there were some wild weather episodes, and some particularly icy days, but we’ve also had plenty of gloriously sunny days, so can’t really complain 😉

And when the weather gets warmer it’s easy to spend time in the garden tidying, rearranging, planting… So I decided it was time to try out the worm tower I pinned ages ago to my Pinterest Garden board, which came from Midwest Permaculture. Of course, we are no-where near the Midwest, however worms do the same job where-ever they are….don’t they?

We had a length of PVC pipe which was cut into 3 pieces of around 50-60cm each. It has a diameter of 10cm. Lots of holes were drilled into the sides so the worms can easily access the goodies inside.

Then we just needed to decide where they were going to go, and dig holes for them. I chose to have 2 in my new still-under-construction rose garden, and one in the supposed-to-be fruit/vegie garden. When we come across more pipe, more towers will be added.

My son and I made sure we had on appropriately sturdy footware: 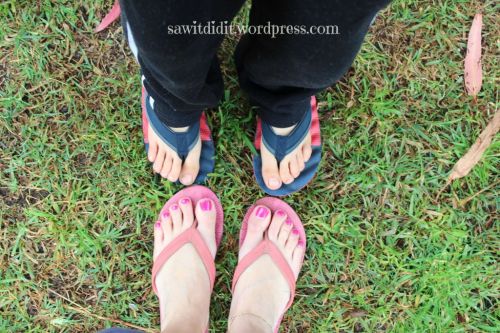 This is Australia, after all!

So holes were dug, the pipes were placed in the holes, and we backfilled the holes. We left about a hands-width of pipe above the ground.

Then we added the first scraps to the worm feeder

and covered it with a lid to keep the rain out

We had one PVC cover, and I used terracotta saucers to cover the other two. This photo was taken a couple of days after we installed the worm feeders, and we had a fair amount of rain in that time! 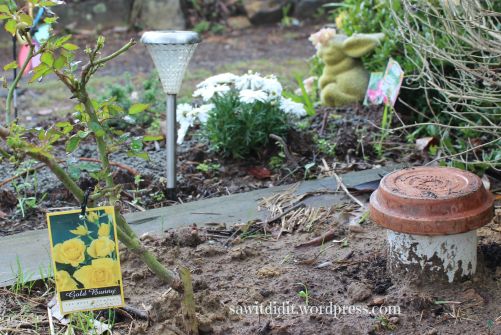 And what about the worms?

Even though there are plenty of worms in the garden, they are earthworms and do a different job to compost worms. Both are important in a garden!

I dug around our neglected worm farm, and was happy to find some wrigglers still going. I transferred these to our new worm feeders, and hopefully they will be happier there.

Reading through the comments on the site listed above, I saw that some people have concerns about using PVC in the garden. Specifically the chemicals that leach from the pipe to the soil, particularly when it gets hot. I have not done any research on this, so can’t comment further. We had the pipe already, so we will see how it goes.

Our normal compost bin is at the bottom of the garden, so having these closer to the house means the scraps can be added to them without too much hassle. Remember to also add shredded paper, and other organic material. We added some hay from the rabbit hutch 🙂 There are some foods that worms don’t particularly care for, such as onion and citrus, so keep this in mind when feeding them.

Do you have a worm farm in your garden?

Tomorrow I need to send a small contribution to a class party. A child in my son’s class is moving away, so a small farewell party is being prepared. So, what to send?

I could send a packet of chips, but there will probably be loads of those (and there is nothing wrong with that as I am sure they will all be eaten!), but I have some time today so I decided to make some very simple and delicious Cake Mix Biscuits. These are so quick and can be flavoured with whatever you choose!

You will find many variations of this if you do a search, but I loosely follow Mimi’s recipe. Which ever recipe you follow, you will find these a very easy and cheap biscuit. There’s no need to use a brand name packet mix either, a generic brand is perfectly good 🙂

I always have a packet or two in the pantry which I use just for these bikkies.

To make these biscuits you will need:

Flavouring – in my case today I used choc chips. You could try chopped dried fruit, coconut, nuts, whatever! You could also add some food colouring if you are using a plain butter or vanilla packet mix.

Mix all together in a bowl, then place small amounts on your baking tray. I used a teaspoon measure, and I got 33 biscuits.

Bake at 180C until they are cooked to your liking. I cooked these for 12 minutes as I like them still a bit soft and chewy. They will harden as they cool, so keep that in mind.

I should have left a bit more room between mine, as they double in size as they cook and mine almost joined together. But that’s not a big problem really!

Leave them to cool on the tray as they will still be soft. As I mentioned, they will harden as they cool.

I hope the kids will enjoy these tomorrow!

Do you have a quick and easy biscuit recipe that you use for school celebrations?