As we were growing up, Christmases were lively affairs filled with siblings, parents, cousins, aunts, uncles, and grandparents. And of course there was always the annual cousin photos with us all lined up oldest to youngest, followed by another photo tallest to shortest. Yes, there was a difference!

However, as we have all grown and started our own families, Christmas gatherings were becoming enormous!

Some years ago we simplified things by celebrating with our own family groups. I have two sisters and one brother, so along with our parents and all the children and partners Christmas is still quite a wondrous feat!

But we missed seeing our cousins, especially as we are now quite spread out across the city, state and country…even overseas.

So a few years ago we started doing a ‘Cousin Christmas’ earlier in December. We meet in a big park where there is more than enough space for all the kids to run around, and the adults to eat, drink and be merry. This means all our children – second cousins – will have some knowledge of each other. There was even talk this time about holding another ‘Cousin gathering’ half way through the year, because for a lot of us, it’s the only time we see each other. And we all kinda like each other..y’know?

To this gathering, we all bring a festive plate of something on which to nibble. Sweet and savoury, there’s plenty for us all to share.

This year I found a very cute idea for Melting Snowman Cupcakes from  Just-Between-Friends.com. (You can follow my Christmas Pinterest board if you like 🙂 )I thought that was a particularly inspired idea since Christmas here in Australia is in the middle of summer. If there were any snowmen to be found, they would definitely be melting!

I started with a plain vanilla cake which I baked in silver patterned cupcake cups, found in Aldi.

Next, I wanted an icing that was stiff enough to hold it’s shape easily, but was also a clean white colour. Jonie’s cupcakes have two distinct melted blobs, however she has used a pre-made frosting. Usually I make butter icing, however that is off-white because butter is yellow.

I made a Royal Icing using 1 egg white mixed with Icing Sugar, adding some milk (water is ok too) to get it to the required consistency. You don’t need to whip the egg white, just break it up before beating in the icing sugar and liquid. 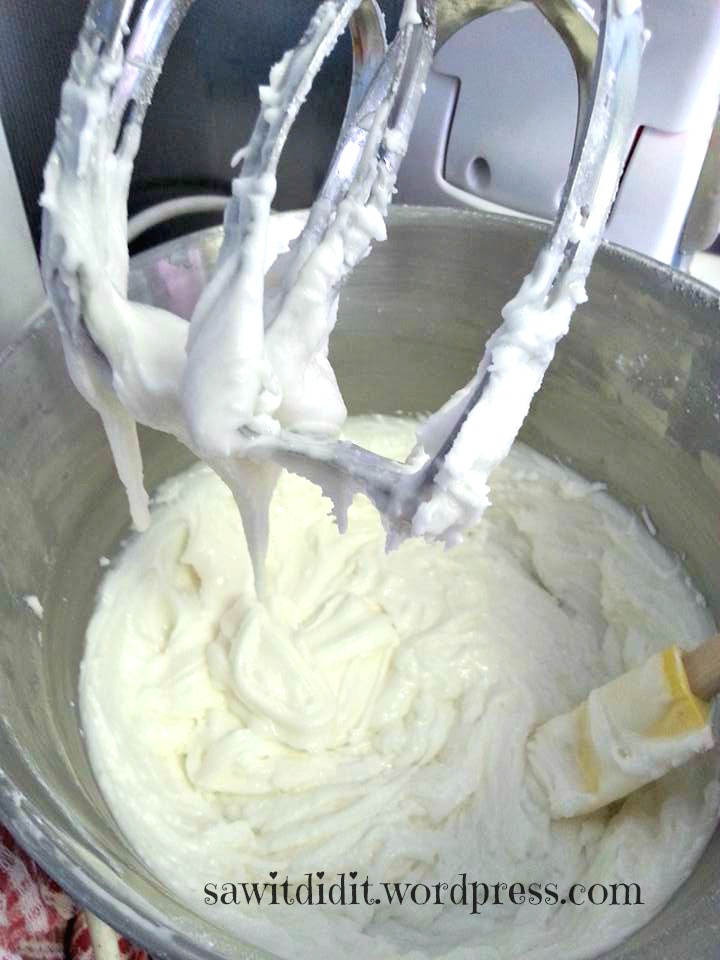 While I working on the cupcakes, my son had been given the job of constructing and decorating the gingerbread Christmas Tree my mum makes each year. So we had icing going everywhere (I made green-tinted butter icing for the tree)!

I added all my icing to a piping bag, however the largest nozzle I found was still quite small. You can see in the above photo that it doesn’t look much like a melted ball of snow. Also, because I baked the cupcakes in cups rather than patty pans, the cake sat below the rim. So you wouldn’t get the full effect of 2 distinct blobs of melted snowman.

Using a wet spoon I smoothed my blobs over, then added half a marshmallow for the head. Snowmen melt faster in summer, so I figured one big blog would be enough!

Following Jonie’s suggestion I used half pretzel sticks for the arms, and chocolate chips for the eyes and buttons. She used mini choc chips, but I didn’t have them. 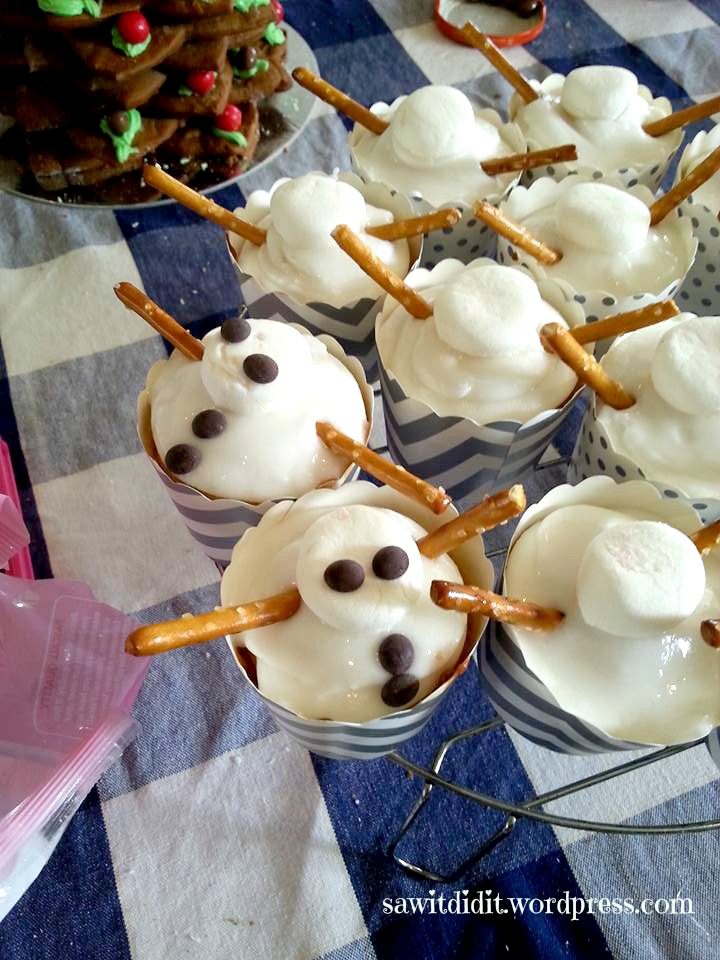 In hindsight (a marvellous thing) I should have put the marshmallow heads closer to the edge so there was more room for buttons.

The cupcake cup pack also had cake toppers, so I stuck those in too!

I don’t think mine turned out as nicely as Jonie’s, however I think you can still what they are meant to be. And they tasted pretty good!

We had fun working on our decorating projects. Here they are finished, ready to be packed up to take to the park: 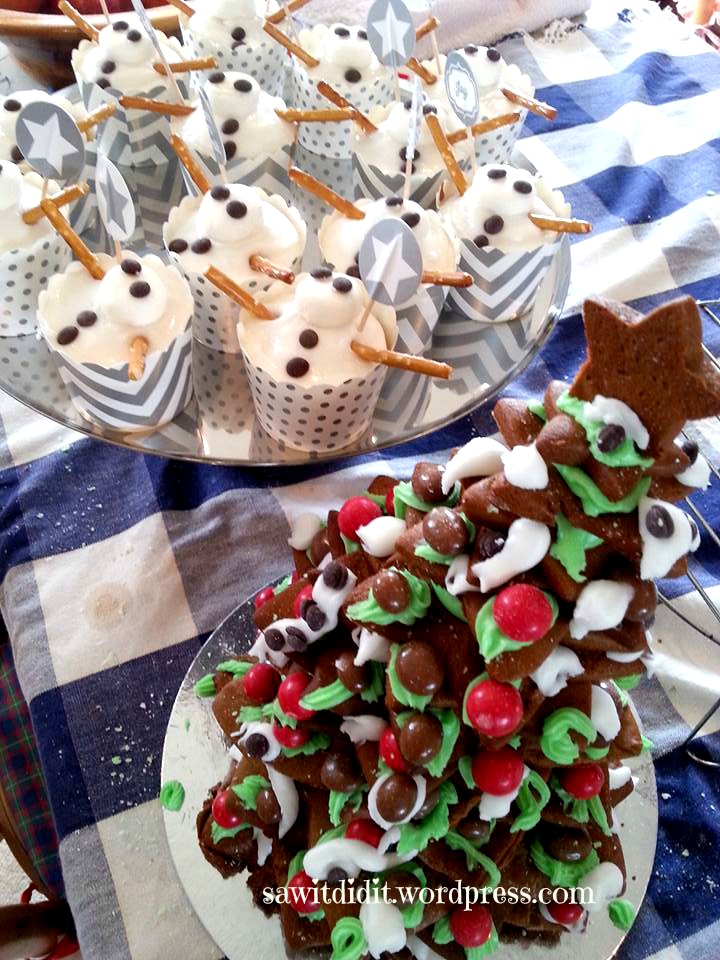 I think our contributions fitted in nicely with everything else!

And just because I can, (with big apologies to my cousins!) here is a photo from quite possibly the last time we all had Christmas together before too many children came along. My sister had just had her first baby, the first grandchild. We are posed in order of tallest to shortest in this photo. I am fourth from the left. I am the eldest of my cousins!

I think I’ll make some more melting snowman cupcakes to take to our street party this weekend! What do you think?